Oakland Post Editorial by Pamela Price, from the October 19-25 2022 edition:

In March 2021. the ACLU and Urban Peace Movement reported that our District Attorney's office prosecutes sex workers and imposes harsh probation conditions. Survivors often report that they are made to feel like criminals instead of victims. My opponent has repeatedly called sex trafficking victims "prostitutes." Advocates know that labeling a trafficked child or youth as a "prostitute" suggests an element of choice — there is no choice in sex trafficking.

Oakland City Council President Nikki Fortunato Bas endorsed my campaign because of our plans to address human trafficking. Bas stated, "It is critical, not only for Oakland residents, but for all of Alameda County to have a DA who understands how to work with victims and has a history of protecting vulnerable women and youth. Pamela is the only candidate who has that history and the only candidate I trust to make innovative changes in how victims are supported and perpetrators are successfully prosecuted."

As the next Alameda County District Attorney, my administration will implement the following solutions:

1) Treat survivors and their families with compassion and dignity.

2) Create a new court designed for survivors with repeat sex work offenses, or offenses arising out of active engagement in the sex trade, modeled after the Project Dawn Court in Philadelphia where 70% of participants successfully gradate from the program. Focus on creating opportunities to divert survivors from the criminal justice system and to build a new life.

3) Expand services for sexually exploited youth and adults with trained staff to respond to the dangers they face, assistance in creating a safety plan as well as transition and long-term plans.

5) Expand services for and outreach to male victims, including gay young men and transgender youth, and build bridges through education, awareness and support.

6) Work with the Alameda County Board of Education, local school districts, youth-led organizations and other County agencies to prevent access to vulnerable youth, with renewed emphasis on best practices and strategies to reduce the number of trafficked youth.

7) Partner with nationally recognized law firms to attack the problem by holding corporations that facilitate trafficking in our community accountable for their part in fostering opportunities for traffickers using the Trafficking Victims Protection Reauthorization Act (TVPRA) and other civil remedies.

Civil rights attorney Pamela Price is a nationally recognized advocate for women's rights and gender equity. She has received the endorsements of Planned Parenthood Advocates Mar Monte, FundHer, California Black Women's Democratic Club, Black Women Organized for Political Action (BWOPA) and many others. When she is elected to serve as Alameda County District Attorney, she commits to respond to the crisis of human trafficking in Alameda County with compassion and in partnership with local officials, including Oakland City Council President Nikki Fortunato Bas. 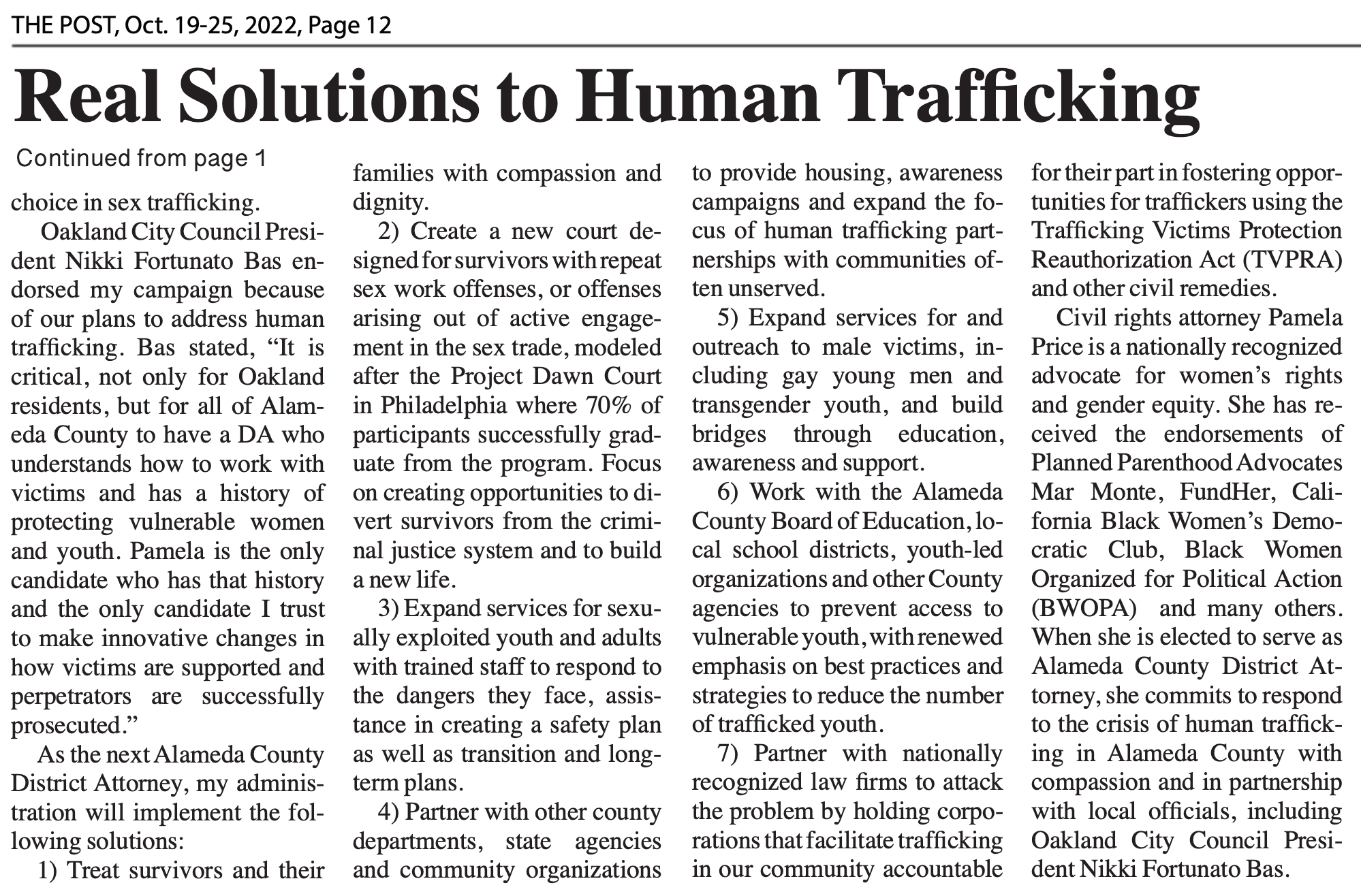