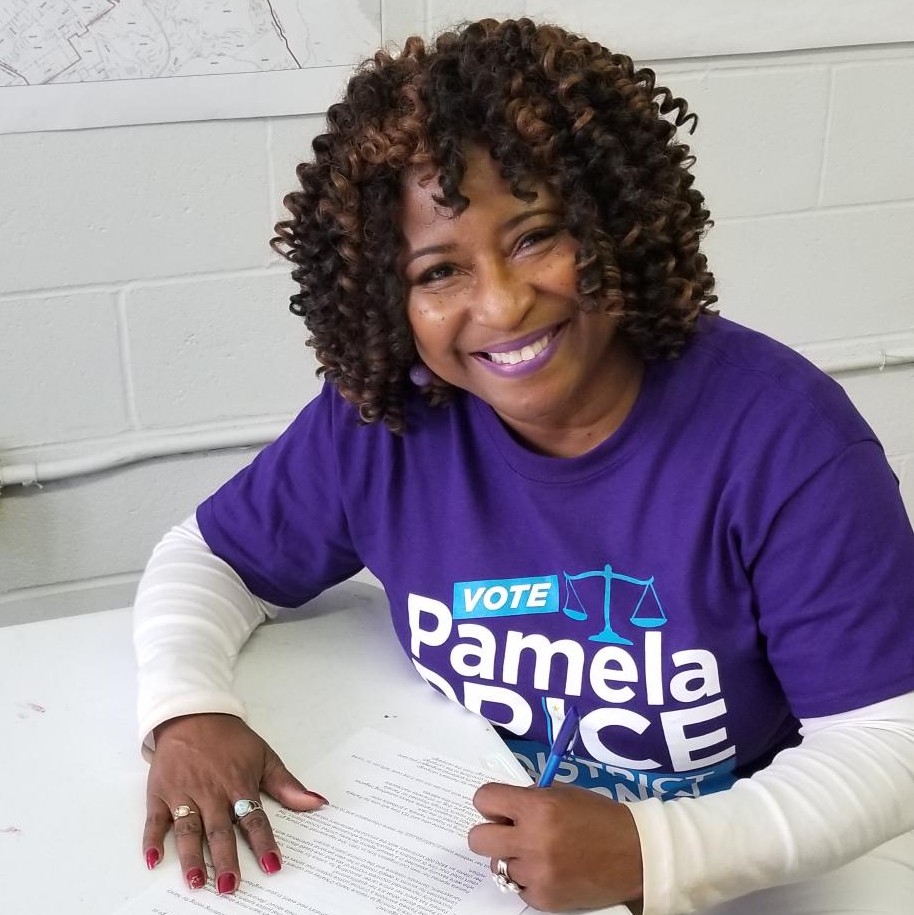 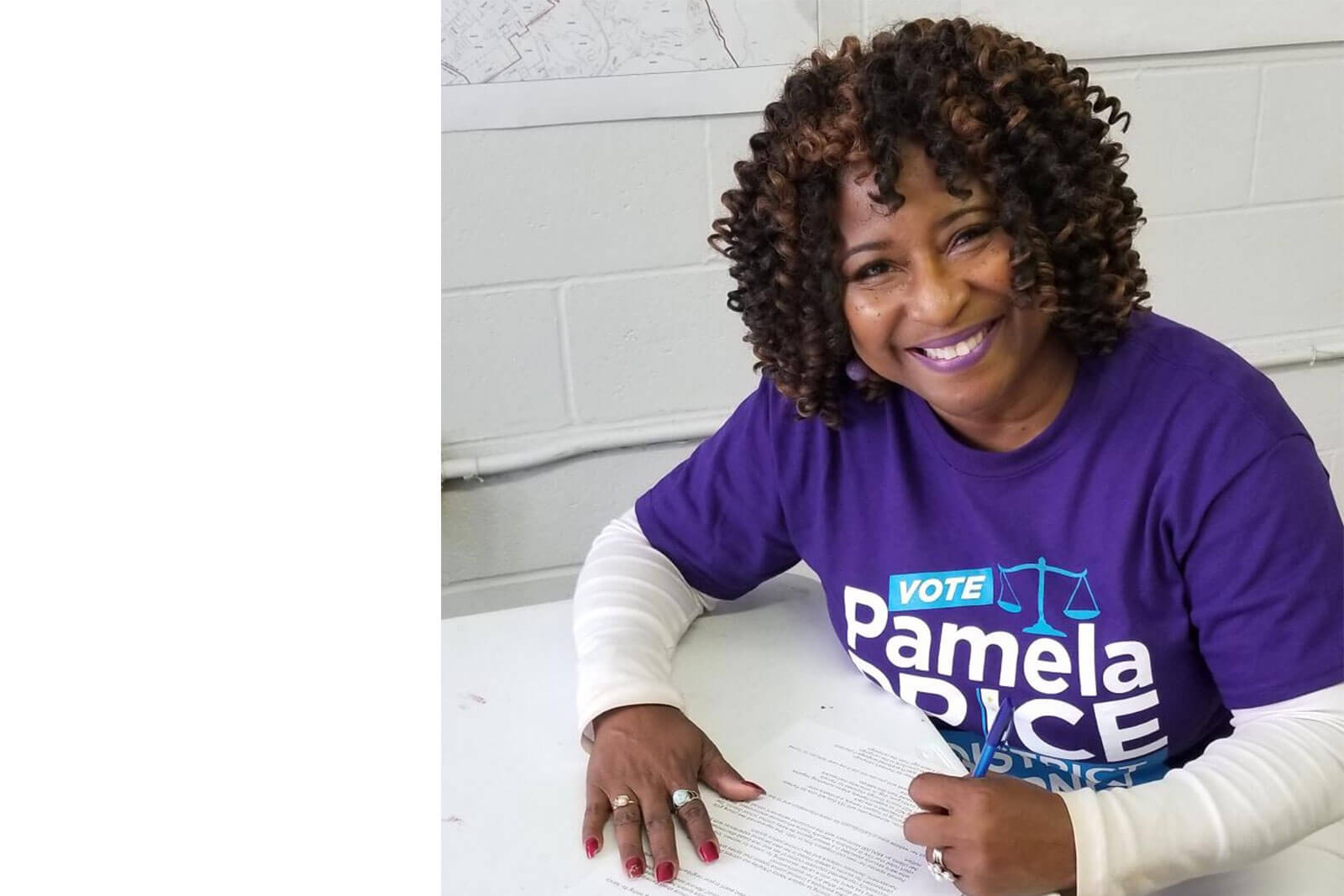 “Pamela Price has committed to not prosecute one child as an adult when she is District Attorney. She will end the racial disparity in prosecutions and mass incarceration of Black and Brown people. These times call for courageous and transformative disruptors of systemic racial injustice. Pamela Price is exactly who we need right now as Alameda County District Attorney.” -Hon. Ronald V. Dellums (d) (May 2018)

“Pamela Price has committed to not prosecute one child as an adult when she is District Attorney. She will end the racial disparity in prosecutions and mass incarceration of Black and Brown people. These times call for courageous and transformative disruptors of systemic racial injustice. Pamela Price is exactly who we need right now as Alameda County District Attorney.” -Hon. Ronald V. Dellums (d) (May 2018)

Pamela started her professional legal career as a criminal defense attorney at the Bayview Hunters’ Point Community Defenders’ office in San Francisco. Her first trial was a felony robbery based on a mistaken identity and she won an acquittal for her client. As a community defender, she handled hundreds of misdemeanor and felony cases and often represented young people caught up in the criminal justice system at San Francisco’s infamous Youth Guidance Center. She left the Community Defender’s office to start a private practice in Oakland, California.

Pamela is a graduate of Yale College and UC Berkeley Law School, and a survivor of the Ohio juvenile justice and foster care systems.

As a survivor of domestic violence herself, Pamela is deeply aware of and sensitive to the needs of survivors of intimate partner violence. She takes these issues very seriously. In 1979, Pamela co-founded and coordinated the Bay Area Defense Committee for Battered Women. In 1981, she was maliciously prosecuted by the Alameda County District Attorney’s office as a survivor of domestic violence, and was successfully acquitted at trial. As the lead plaintiff in the Alexander case, and as a lawyer, Pamela has represented dozens of victims of gender-based violence.

Pamela is fully committed to addressing violence in our community and especially against women and children, including the literally hundreds of crimes labelled as “domestic violence.” Intimate violence cases that result in serious bodily harm or injury which include elder abuse, family violence and intimate partner violence will be prosecuted as appropriate. When dealing with such cases, Pamela will always prioritize the safety, needs, and desires of survivors (and children, if they are involved) and seek long term solutions that will keep families and communities safe.

As a tenacious civil rights attorney and a political activist working to advance the cause of justice, Pamela Price has a demonstrated track record of supporting progressive change and fighting for racial justice. She has handled dozens of police misconduct and race discrimination cases in state and federal courts.

In 2002, Pamela Price became one of only a handful of Black women to ever argue in front of the United States Supreme Court. In that case, she successfully advocated for her client, Abner Morgan, a Black electrician, who had been subjected to constant racial harassment at his place of employment. The U.S. Supreme Court ruled in her favor, and after a ten-year battle with his employer, Amtrak, her client finally won a verdict of $500,000.

Their victory established the legal precedent for the "continuing violation" doctrine that applies to all discrimination cases brought under federal law in the United States. Because of the outstanding result in the Morgan case, Pamela was honored as the California Lawyer of the Year in Employment (CLAY Award).

In 1979, while still in law school at Berkeley, Pamela co-founded and coordinated the Bay Area Defense Committee for Battered Women. The Committee's Advisory Board included prominent feminists such as civil rights icon Angela Davis and lesbian and gay rights pioneer, Del Martin.

From 1982-84, Pamela co-chaired the Bay Area Chapter of the National Conference of Black Lawyers (NCBL) and served on NCBL's National Board.

Pamela is one of the founding members of the famed Bay Area choir, Vukani Muwethu, which has been singing South African freedom songs since 1986.

In 2007, Pamela was appointed to serve as the Interim Executive Director of the Lawyers Committee for Civil Rights in San Francisco, an organization committed to protecting the civil and human rights of poor communities, immigrant communities, communities of color, and other marginalized groups. She later served two terms as the Co-Chair of the Board of Directors, and as the Director of Special Projects. She has been a member of the Lawyers Committee since 2006. In 2009, her firm received the "Living the Dream Award" for its generous financial contributions to the Committee.

Pamela has also served in leadership roles in the Black American Law Students Association (BALSA), Black Women Organized for Political Action (BWOPA) and the Oakland East Bay Democratic Club. She is also the CEO and Founder of the Ida B. Rising Political Action Committee.

In 2017, Pamela was honored as the Woman of the Year for Assembly District 18 by Assemblymember Rob Bonta and the California Legislative Women’s Caucus for her lifetime of social justice advocacy and service to the people of Alameda County.

As a member of the Central Committee, Pamela has been an advocate for her community. From 2016-2020, she was the only Black woman on the Committee representing Assembly District 18, which includes most of Oakland and all of San Leandro and Alameda. In 2020, Pamela ran with a diverse slate of corporate-free community activists. Their successful efforts led to a major change in the leadership and composition of the Central Committee.

On the Central Committee, Pamela sponsored or co-sponsored resolutions to